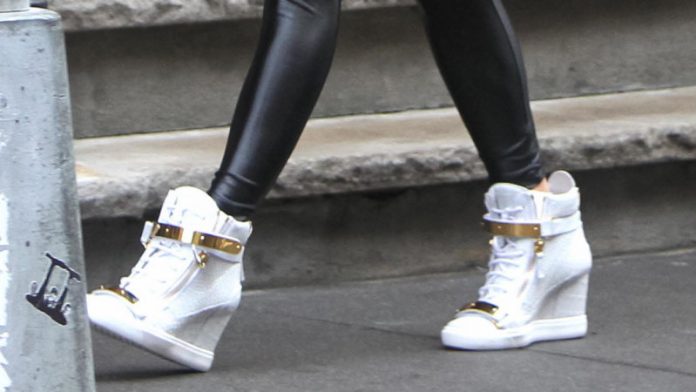 At first, the looks which defined this decade seem to be a difficult thing to assess, particularly given we have been so determined to describe trends of the 2010s as inspired by sometime else.

With Mad Men on our screens, we fell love with classic 1950s style. Then we steered to the ’90s (jeans and joggers), came straight back to the ’80s (shoulders!) before ending this decade in a flowy-skirted flourish of the ’70s, with some ironic naughties accessories for good measure.

But, despite this, there are some items that are decidedly 2010s.

The Apple Watch has been giving us one more thing to turn onto silent when we sit down at the cinema since 2015 and you had better believe that the costumes shops of 2030 will be stocking a plastic imitation with some nondescript name (“Retro iSmart Watch”) for you to purchase for a 2010s dress-up event.

Did you go to nice restaurants in your gym gear in 2009? Did you have a “good” pair of white sneakers in 2004? Did you even consider a need to have more than one pair of white (or any!) sneakers at any point before this decade? No. No you did not. But with high-end “athleisure” brands such as Supreme, PE Nation and Off-White coming to the fore and the renewed popularity of old classics such as Fila, Champion and Adidas – not to mention that viral video by Aussie comedy group Skit Box – the 2010s became a decade for “buying activewear in my activewear”.

A ’70s throwback, sure, but the jumpsuits of the 2010s were made for occasions ranging from music festivals, to the office and, increasingly, black tie events. Towards the end of this decade the jumpsuit cemented itself as a go-to wedding guest outfit – truly, it is now part of the formal dress shopping experience to run ones hands along the skirts of the dresses on the rack, pulling them apart slightly to ensure they are not actually pants – and, although they make for a difficult trip to the bathroom, it is a trip you may just have to factor in if you find yourself needing to dress for a 2010s party in however many years time.

It was 2013 that saw the dawn of “normcore”, the trend which made Jerry Seinfeld a fashion muse and your dad unexpectedly trendy. For a couple of very comfortable years, jeans and joggers were the coolest thing you could wear as a result of this anti-fashion trend. Arguably also brought forth by reframing of the “normal” as hardcore: birkenstocks, overalls, and plain T-shirts and sloppy joes.

Wedge sneakers appeared everywhere and then politely showed themselves out all within the space of a few months in 2012, but they remained in our minds and discount bins for far longer. Although the butt of many jokes, we are perhaps too quick to discredit the ugliest of the ugly shoes: this athleisure heel walked so sneakers to a formal event could run (literally).

“Logomania” – the penchant for whacking a big brand name on anything and everything declared by Business of Fashion to have reached a peak in 2017, although it has certainly had staying power – brought with it a love of the slogan and/or logo tee. Some were political (see: Dior’s We Should All Be Feminists T-shirt) while others were just worn by women with nice hair on Instagram (see: the $570 Gucci logo tee). Viktor & Rolf took the trend to its extremity at Paris Fashion Week in January, with the debut of the slogan gown, bearing torso-length slogans such as “Sorry I’m late, I didn’t want to come” and “I am my own muse”.

The exact hue was always up for debate – somewhere between a pastel salmon and a bubblegum – but, after a couple of years dominating fashion and homeware design (particularly for the under 30s i.e. the Kmart home aisle), the Wes Anderson-esque millennial pink guaranteed its place in tonal history when it was named one of Pantone’s colours of the year in 2016, under the monniker “rose quartz”.

The 2010s were the decade the royals became celebrities again, selling out styles and, in the case of the Duchess of Sussex, even designing a few themselves. In the lead up to the Royal Wedding in 2011, the Duchess of Cambridge became a fashion influencer, with blogs such as What Kate Wore keeping an archive of her every frock. Making the transition from actor to posh public servant last year, Meghan followed suit, and her commitment to ethical fashion has been widely documented. But, what does this mean for your costume plans? You could, of course, opt for a replica of Kate’s “outside the hospital” Jenny Packham polka dot dress or Meghan’s Stella McCartney halter reception frock, but perhaps the influence could be more subtle: the demure nude heel has been an unlikely hero of the decade, all thanks to its role in the royal wardrobe.

Mary Ward is Deputy Lifestyle Editor of The Sydney Morning Herald and The Age.