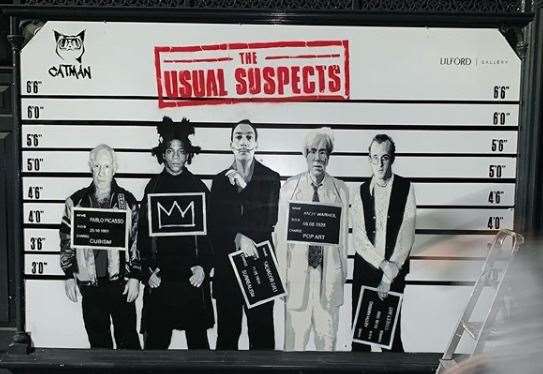 A popular anonymous street artist has struck again – with a new piece sprayed on a derelict shop front.

Catman, a Whitstable-based artist who keeps his identity closely under wraps, sprayed his latest creation on the side of the former Debenhams store in Canterbury city centre last night.

It is a reproduction of a popular mural Catman originally created in London’s Portobello Road in 2017, which he has since exhibited around the world.

In a post on Instagram, he wrote: “Under the light of a full moon, I repainted this mural last night in Canterbury city centre.”

Speaking to KentOnline, he told how the window on the side of Debenhams in Guildhall Street provided “the perfect spot” for the artwork.

“The original piece I did in London was on a flat wall – although a good spot it was not perfect, as I really wanted to capture the effect of looking in on an ID parade like you see in films,” he said.

“The way its environment frames this, I think you really get that perspective much more.”

The piece depicts each artist holding a chalkboard, stating their name, date of birth, and “charges”; which are given as cubism, surrealism, pop art and street art, respectively.

Basquiat’s sign however features only the image of a crown – a motif commonly featured in the artist’s own works. “I just love Basquiat’s iconic crowns and wanted to fit it in some way,” said Catman.

David Lilford, owner of Lilford Gallery in Palace Street, has worked with the owners of the former Debenhams building and with Canterbury’s Business Improvement District to help brighten up the area.

“With Debenhams closing it was pretty dreary,” he said.

“We’ve managed to get vinyls done there, and there was a broken window which I got the owners to cover up.

“Then Catman very kindly agreed to do this fantastic piece on it.

“It’s a great piece for Canterbury because it’s one you can Instagram – he’s left a space at one end for people to join in with the artists in the line-up, which is really cool.

“We’re excited because we sell Catman’s work here – we’re one of only two galleries in the country to have his prints and paintings. We just love having his stuff in – he’s such a lovely guy to deal with, and he’s easily one of the best stencil artists in the country working today.”

It is not the first time Catman has created artwork in Canterbury.

In 2015, he daubed a piece featuring a pig flying through the air attached to balloons, on the side of homelessness charity Catching Lives in Station Road East.

At the start of lockdown, he made headlines when he created a new artwork dedicated to “superhuman” medics working on the coronavirus frontline.

And it is not the first time Catman has used his medium to make poignant comments about current affairs, having previously created artwork touching on key topics such as Brexit and plastic pollution.

He is also well-known for pieces including his “shop local” and “drink local” pieces promoting Whitstable’s independent shop scene, and an image of the Queen riding a hoverboard in the town.

Read more: All the latest news from Canterbury

What is ‘phygital’ fashion? – News

The age of the influencer

LVMH Is Stellar, the Rest Still Have to Prove It

4 Beauty Trends That Reshaped Industry During The Pandemic