Home Street Style Jason Flack aka, Flacktion Art ‘This is a thing I have to... 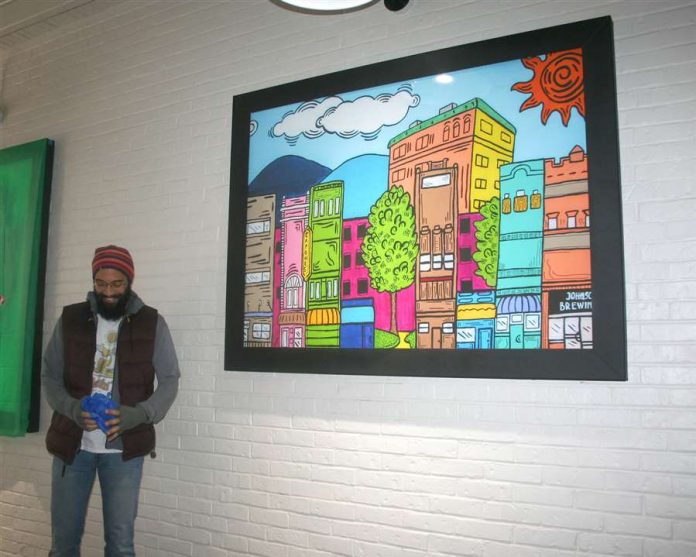 This past December, Johnson City’s Public Art Committee unveiled a new semi-permanent outdoor gallery that turned a darker corner of the downtown area into a new outdoor gallery.

One of the paintings by Flack is a large, colorful recreation of Main Street in Downtown Johnson City. The familiar buildings that stand only a short walk away are depicted in bright, cheerful colors that pop with a bright blue sky and red sun. The painting brings a bit of Flack’s unique street style to the Gallery on the Square.

A self-taught artist, Flack draws inspiration from the bright bold colors and thick black lines of the cubist art by famed Spanish painter Pablo Picasso, and the street-art style of the late Keith Haring to name a few. The content of his work ranges from political statements and pop culture characters to recognizable local spots and people to doodles of original monsters.

A Johnson City native, Flack has been drawing and creating art since he was a child, drawing on the backs of envelopes and aspiring to create cover art for musicians. Over the years his path diverged from art until 2010 when Flack lost his twin sister, Jessica.

Flack said he realizes now that there are only a few roads you can go down when grieving. And eventually, he took a turn for art.

“This is a thing I have to do no less or no more than breathing,” said Flack.

Flack took up painting — something he never did — and started to create. He and a close-knit group of artists struggled to find places for their art for a while.

Eventually, downtown began to grow. Now he said he sees some local art but he wants to see more in the streets of Johnson City. He wants to see artists stay at home and throw away the notion that they have to leave for New York or Asheville, North Carolina, to be successful with their passions.

“I feel like there’s a wave coming,” Flack said. “I do not know how long that wave is or how long it will last, but it’s coming.”

Either way, whether Johnson City chooses to embrace artists or doesn’t Flack said he’s not going to stop. He’s on a mission to paint his hometown “a little more colorful than it is.” But whether the town embraces the art or not, he’s still going to keep creating art.

“I’ve already signed the contract with myself,” Flack said.

And flack encourages others to do the same. He said he wants local artists to keep showing up, keep creating and put themselves out there.

“The table is big enough for all of us to create,” said Flack.

Everything you need to know about New York, London, Milan and Paris Fashion Weeks

This Bag Is Worth 50,000 Rupees And It Literally Looks Like A Lota

No bail for Vic man over mass kill threats