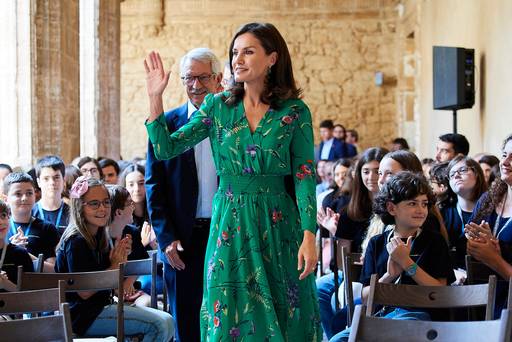 Thanks to the ‘Meghan and Harry effect’, the spotlight has been shift from being exclusively shown on the British royals, who are becoming increasingly complicated, towards royalty further around Europe. And now one has been more of a talking point than Spain’s Queen Letizia.

Letizia is, of course, one of the most – if not the – most famous woman in Spain, but it’s only in recent years that the rest of the world has come to grips with the newsreader-turned-queen and her impeccable style. Hers is a Cinderella story of the highest order, not quite rags to riches as she was a broadcast journalist reading the nightly news on Televisión Española when her now-husband King Felipe asked for a date, but she transcended towards unimaginable wealth and infuence.

Her style journey has been well-documented by the Spanish press over the years, since coming to prominence in 2003 when she and Felipe announced their engagement after secretly dating for more than one year. She’s had the benefit of little global scrutiny over the years while she was still finding her feet in fashion and identifying her own personal style; unlike Meghan Markle, who has had to endure foot right and wrong in front of an unforgiving global audience.

Thanks to the globalised access social media offers and the growing fascination into royalty because of the Sussexes and Cambridges’ consistent popularity, there are a number of accounts dedicated exclusively to chronicling royal fashion and Letizia performs extremely well across platforms. Her seemingly endless wardrobe of flawless styles, mixed with high street choices and recycling previous choices a la Kate Middleton, she been elevated to mainstream must-follow fashion lists.

But this summer proved to be the turning point in her fascination and she engaged in a number of high profile visits abroad and continues to operate almost daily appearances for her royal work, thus providing a stream of content for digital and social brands. When she visited the UK for the Order of the Garter service, she was hailed as best dressed alongside Kate Middleton, Sophie of Wessex and Dutch Queen Maxima –  no easy feat.

Her monochrome dress by Cherubina was the perfect tonic to the Brits’ often too-formal attire, but she matched the dress code with a heightened headband with floral detail. The fact that it costs €280 was reminiscent of her choice to mix high-end and high-street looks for all her appearances, choosing between a roster of Spanish designers like Pedro del Hierro and Felipe Varela alongside Zara.

She sent the Internet into overdrive when she stepped out in an off the shoulder tweed dress from the retailer, most notably for the fact that it was on sale for €20.

Her preference for floaty floral midi-dresses sums up 2019’s summer aesthetic and showcases how in-tune Letizia is with both the trends du jour and setting herself apart.

Zendaya: Fashion helped me make the transition from Disney Channel to movies

The ’90s are back! 9 velvet and corduroy looks to nail the trend