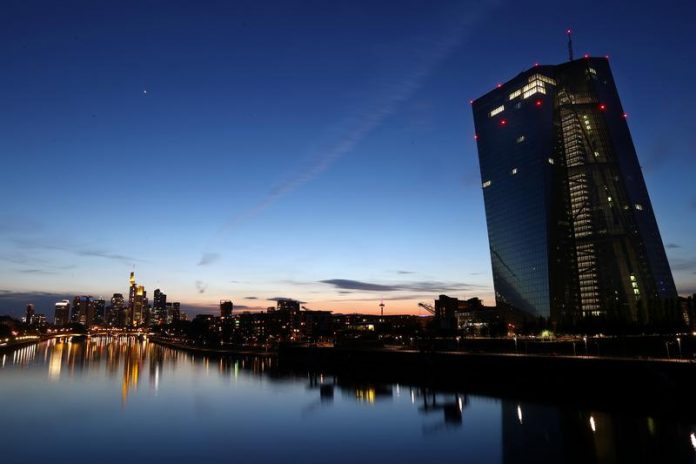 FRANKFURT/NEW YORK (Reuters) – Europe is working on an Amazon-style website to sell hundreds of billions of euros of bank loans which have been soured by the coronavirus crisis, in a bid to shore up the economy and challenge the dominance of big Wall Street debt investors.

The blueprint, devised by top European Central Bank (ECB) officials, is part of efforts by the 19-state euro zone to tackle a growing pile of unpaid loans and aims to prevent “distressed debt” funds from buying them at rock bottom prices.

“The idea is to open up the market to buyers of smaller portfolios, with an Amazon or eBay-style marketplace, where you can browse … That can get the market moving,” Edward O’Brien, a senior ECB official involved in the plan, told Reuters.

Large funds bought billions of euros of loans in the aftermath of the last financial crisis, in the process acquiring swathes of property some of which has since risen in value.

“The market for bad loans has been dominated by a few very large buyers. In a typical scenario, one of these firms may buy a very large portfolio at steep discounts,” O’Brien said.

A study by Deloitte found that of the more than 450 billion euros ($529 billion) of loans sold in Europe between 2014 and 2019, roughly half were bought by Cerberus, Blackstone, Lone Star and Goldman Sachs.

Blackstone and Cerberus did not respond to a request for comment. Goldman Sachs and Lone Star both declined to comment.

Banks offload bad debts, normally at a fraction of their face value, to free up their balance sheets to make new loans and keep both their own business and economies going.

The ECB scheme, which has yet to be signed off and will be discussed with European Union officials on Friday, is inspired by Italian website BlinkS, which links buyers and sellers of loans, as well as debt auctions by a U.S. federal agency.

If EU states agree, the new marketplace could come under the Single Resolution Board (SRB), a European Union agency in Brussels that winds up failing banks.

“Why is it that every public contract has to be put out to tender in an open competition and bad loans can be sold off behind closed doors?” Bostjan Jazbec, an SRB director, said.

“Success in buying and selling bad loans involves a lot of insider information. COVID means more bad loans ahead. Any sale must be transparent,” Jazbec added.

Debt in the euro zone considered unlikely to ever be fully repaid stands at more than half a trillion euros, including credit cards, car loans and mortgages, and is set to rise.

“The problem is bad loans is too often understood to be one that is limited to banks. But it is far wider, it affects the whole economy,” Fell said.

It is usual for banks to sell old loans to investors, with individual packages sometimes topping 10 billion euros, but the ECB is concerned that this is skewed in favour of big buyers.

“There are only about half a dozen buyers who can write a cheque for hundreds of millions of euros,” said Gifford West of DebtX, which runs a similar platform in the U.S., adding that packaging the loans into smaller bundles could widen the pool of buyers up to 1,000.

Under the new platform contemplated by the ECB, which could be up and running early next year, the packet size could be cut to 10 million euros, attracting smaller buyers who may pay more.

As well as an economic angle to the ECB’s blueprint, there is also a strong political dimension to challenging such big investors.

Supporters say they played a critical role, for example, in buoying the flagging Irish property market, after its crash.

But critics have dubbed them “vulture funds” and their power was a lightning rod in elections in Ireland this year when Sinn Fein secured more votes than the establishment parties for the first time.

The left-wing party’s popularity was lifted by a housing crisis it partly blamed on fund investors crowding out the property market.

And in Spain, the rising cost of housing, also attributed in part to the role of big investors, was an issue in elections last year, prompting Madrid to tighten tenant protection.

How To Grow A Small, Niche Brand Sustainably

Lewis Hamilton and Law Roach, at the Intersection of Fashion and Activism

This Stylist, Producer & Model Has Been Re-Creating Mesmerising Runway Make-Up Looks During Lockdown

Winter fashion: The best knitwear trends to update your wardrobe, including the cardigan and jumper dress