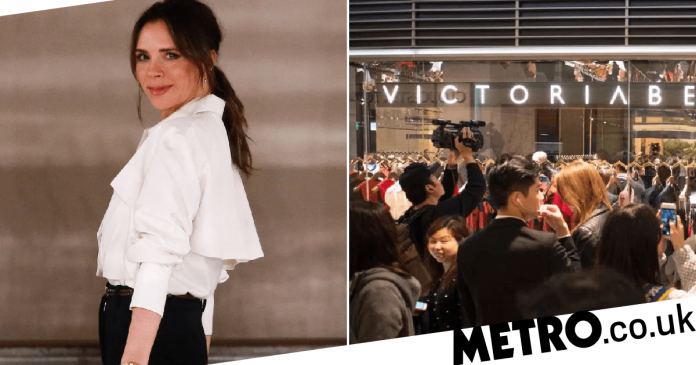 Victoria Beckham returned to social media this weekend after being criticised for furloughing staff members at her luxury fashion brand.

The former Spice Girls star had mostly stayed away from Instagram over the past week while receiving backlash for using the government scheme to pay staff during the coronavirus pandemic.

However, Victoria returned on Sunday to share some fashion inspiration with her 28.3 million followers.

Taken during the Victoria Beckham show at London Fashion Week in September, the video clips featured models strutted down the runway wearing pieces from the brand’s spring summer 2020 collection.

‘It’s a sunny Sunday 🌞 x,’ Victoria wrote next to a photo of a model wearing a yellow dress with ruffles and plunging neckline.

‘Fresh colours and fluid silhouettes in motion,’ she added.

On more of a personal note, Victoria continued the nostalgia by sharing a photo of her and husband David Beckham posing with friends as well as her sister Louise.

‘Looking forward to when we can all be with friends and family again,’ she wrote.

It comes after sources claimed the former pop star felt the criticism of her furloughing staff was ‘unfair’.

Reports emerged that Victoria, 46, had furloughed 25 members of staff at the fashion label meaning the government would pay 80 percent of their salary.

An insider later told The Sun: ‘Victoria’s telling friends that despite it being her birthday, it’s been the “worst week”.

‘She’s really upset and doesn’t think it’s fair she’s getting slammed for something a lot of companies and businesses are doing.

‘She thinks it’s unfair and had no idea the backlash would be this bad.’

A spokesperson for the mum-of-four said: ‘We are working hard to ensure our much-valued VB team are protected by keeping our business healthy.

‘Having carefully assessed all our options, we made the decision to furlough a proportion of staff on an enhanced package.’

Got a showbiz story?

If you’ve got a celebrity story, video or pictures get in touch with the Metro.co.uk entertainment team by emailing us [email protected], calling 020 3615 2145 or by visiting our Submit Stuff page – we’d love to hear from you.

MORE: Victoria Beckham ‘upset by unfair backlash’ as she furloughs staff amid pandemic

Get the need-to-know coronavirus news, features and tips, right to your inbox.