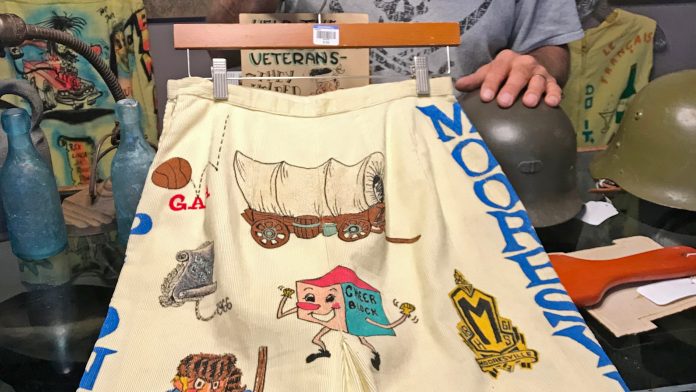 When you stop and think about fashion trends for teenagers, poodle skirts, bell-bottoms or trendy athletic shoes probably spring to mind.

But, in my humble opinion, “senior cords” are without question the most unique and greatest trend in youth fashion.

And it was a trend that began and thrived in Indiana.

The painted A-line corduroy skirts and trousers were worn by senior high school students. They were often cream or soft yellow and decorated with personalized graffiti which reflected a student’s personalities and interests.

According to the Purdue University Archives and Special Collections, the trend started in 1904, when Purdue seniors noticed a bolt of yellow corduroy fabric in the window of the Taylor Steffen Co., a tailor on Main Street in Lafayette. The seniors decided to have pants made from the fabric. The fashion trend took off with the rest of the senior class and by the 1920s and ’30s, seniors at Purdue held an annual senior cord parade each fall.

Mike Constable holds up a Mooresville senior cord skirt from 1969 at The Constable’s Antiques store in Mooresville on Sept. 25, 2019. (Photo: Dawn Mitchell/IndyStar)

Teen canteens: A place to ‘Swing,’ ‘Bop’ and stay out of trouble

The Elizabeth Sage Historic Costume Collection at Indiana University has an extensive collection that includes corduroy pants as far back as the 1920s.

The cords were a canvas for elaborate artwork that typically consisted of comic book characters of the day, popular catchphrases, extracurricular activities, nicknames, boyfriend’s names and special events and people in their lives — a walking yearbook if you will. College kids often included fraternity and sorority symbols as well as clubs and school mascots.

The “cords” or “whistlers,” a reference to the sound the pants made when walking became a fashion fad for high school and college seniors across the state.

Senior cords caught on at some college campuses across the country but didn’t quite take hold elsewhere like they did in Indiana. The trend died out in the early 1970s, as school consolidations forced the closure of many high schools, thereby ending emotional ties to both school and community.

The cords were typically worn on Fridays or the days of major sports events and only by seniors — and the longer one could go without washing the pants, the better. If an underclassman dared to break the fashion code by donning a pair in public, they were swiftly and publicly de-pantsed and the pants were hung in a public place as a warning.

In 1906, an editorial in the Palladium-Item denounced the new trend at Richmond High School, “in this country we do not tolerate class distinction and insist that everybody be placed upon an equal footing.” In 1946, Kokomo High School banned senior cords, saying It divides our student body and is harmful to school spirit.”

“It’s art and a good reflection of the times,” said Mike Constable, owner of The Constable’s Antiques in Mooresville.

Constable collects senior cords like priceless artwork. He seeks out the vintage pants and skirts, but not to sell them; he appreciates the creativity and artistry that’s displayed. His collection is a view into the evolution of teenage interests, from the innocence of Snoopy to the grotesque hot-rod character, Rat Fink.

There appears to be a new appreciation for senior cords. In 2018, fashion designer Ralph Lauren unveiled corduroy pants that resembled senior cords.

But will they make a comeback at Indiana high schools?