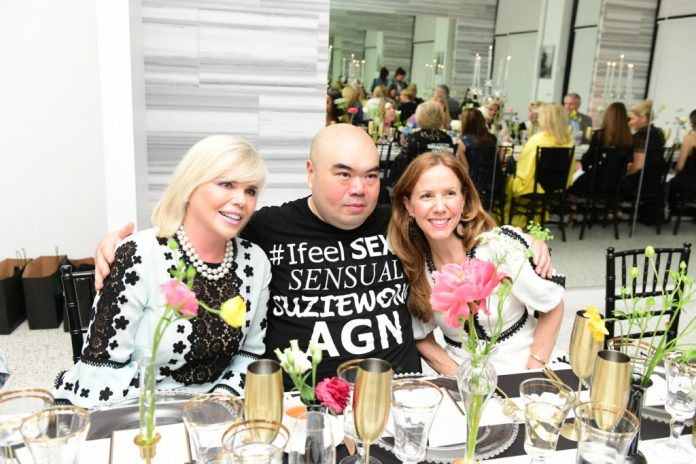 It was a determined clutch of fashionables that braved Tuesday night’s deluge to have dinner at Tootsies with Paris-based designer Andrew Gn. So congenial is the Singapore-born phenom and so fabulous are his designs, few if any femmes among those invited to the intimate gathering failed to show.

And how they loved his fall collection, showing the love with orders for his gowns, dinner dresses and caftans placed practically nano seconds after the seated dinner concluded.

As sleek models paraded the narrow runway shortly after cocktails, Gn provided a galloping commentary but not before he credited Tootsies with his early success. “Penne (Weidig) and Mickey (Rosmarin) were the first to pick me up when I was a young lad, just starting out. Tootsies is family,” he said.

(Veterans of the Houston social scene will recall Tootsies’ introduction of the fledgling designer two decades ago at a glorious garden event in the museum district home of Cynthia and Tony Petrello.)

On this night, the well-established darling of fashionistas was suffering from a common Houston malady — allergies. While others sipped champagne and wine, he downed cup after cup of cappuccino keeping his energy level at a peak.

“Feathers are so fashionable this season, there no more birds in France. They died for a good cause,” he quipped as models paraded in fashions trimmed in floaty marabou and other feathers.

As the ladies swooned over the designs cut from remarkable fabrics, Gn explained that one was a remake of a fabric created in the 18th century for the royal court of Poland while another was copied from a small swatch of fabric from the Victoria & Albert Museum. He allowed that all of his fabrics are designed in house and this collection included silk crepe, silk georgette, lace over silk taffeta, appliqués of 3-D embroidered flowers and beading.

Among observations on his designs:

“The magic zipper,” he said of the bodice front opening repeated in several creations. “When your husband is around, the zipper is up and in the evening when you are with your lover, it comes down.

“There is a new way of dressing for evening: the evening blazer. It’s powerful. You can wear it with a gown, with jeans and a T-shirt.”

“That’s a statement. I love that,” he said of a striking over-sized black and white leopard print coat and dress.

And another observation: “Texas girls are always so cheerful, so nice,” he noted. What else could he say, joined at the lengthy dinner table by the effervescent Valerie Fuller and the always-interesting Meg Goodman, a devotee of Gn’s chic caftans. Monarch Catering provided the lady-pleasing dinner, which was served at one long table decorated with soaring candles and spring flowers.

The Tootsies team was out in all force on this special evening including owners Donna and Norman Lewis, creative director Fady Armanious, senior buyer Penne Weidig and more. Before the party began, the entire team donned Gn’s T-shirt of the season reading: I Feel Sexy, Sensual, SUSIEWONG, AGN. Dressed in the same Gn posed for a group photo of the fashion moment. Guests were given their own T-shirts as party favors.