Home Celebrity Women over 50 are *finally* having a moment 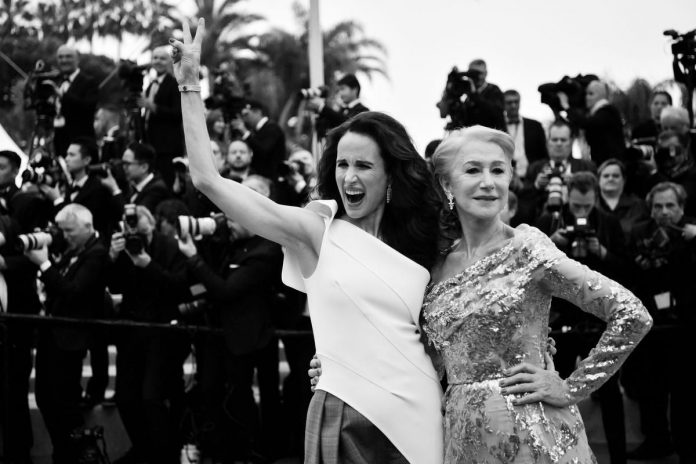 Here’s a bright spot on the horizon: 50 is suddenly the new 30! As we break down barriers of inclusion on all fronts, we’re seeing a new celebration of women in their “third age” — 50s, 60s, 70s and beyond — who used to be seen as over the hill, if not completely invisible. Beauty and fashion brands have begun seeking out 50-plus faces and bodies — both celebrity and “real” — to represent (and peddle) their products. And female entrepreneurs and artists who have switched gears later in life are being widely celebrated for their reinventions.

A tipping point of sorts came at the Super Bowl in February. “The moment Jennifer Lopez came down the pole at halftime, Twitter exploded with younger women saying, ‘I can’t wait to turn 50!” says Laura Minquini, who helms Canadian startup Mykigai. A curated community for people over 50, it’s billed as “your companion for a rich third age lifestyle.”

Minquini has witnessed this sea change during the launch prep period for Mykigai over the past two years (the site is currently in beta testing). “It’s on! For sure, 2020 is the year of having good conversations about turning 50,” she says. “Age is not a pathology, it’s an opportunity. One of the biggest accomplishments of this century was extending lifespan — we live not just longer lives but healthier lives. It’s true: 50 is the new 30, and 60 is the new 40.”

This March, to coincide with International Women’s Day, Toronto intimates brand Knix launched a campaign with the announcement that “Women over 50 still exist, and they are as sexy, confident and badass as ever!” The brand cast a selection of women aged 50 to 81 via social media, to model the brand’s underwear. It’s part of a wider shift toward inclusion in the lingerie industry. New Zealand label Lonely Lingerie has been using age-diverse models (and size diverse, and models with natural body hair) in its beautiful imagery for some time.

On the fashion front, Canadian street-style photographer Tommy Ton recently cast a range of older models for the fall/winter presentation for New York label Deveaux, of which he is creative director. The resulting images are thoughtful, compelling and truly aspirational.

Equally inspiring is the photo shoot 51-year-old Lucy Liu stars in for Marie Claire China’s March issue. The actress embodies music icons ranging from David Bowie to Debbie Harry, and called it the “most creative” shoot she’s ever done.

The shift to accepting older faces and bodies as being able to represent something covetable began in earnest two years ago. That’s when we saw a 65-year-old Isabella Rossellini reappear in Lancôme beauty ads after two decades. Rossellini’s career trajectory can be used as a benchmark in the journey toward acknowledgment of older women’s beauty. The Italian actress, best known for Blue Velvet, was the face of Lancôme from the age of 29 until she was fired at 43 for being too old, right around the time her movie offers dried up. She pivoted, pursuing a degree in animal behaviour and moving to the country to tend bees and train guide dogs; she even made a film about the sex lives of insects. In 2015, because a woman’s perceived window of attractiveness was finally starting to expand — and because being truly interesting begets serious glamour — Lancôme came calling, wooing Rossellini back at age 63, though she didn’t appear in its ads until 2018. At 67, she is currently on the March cover of Marie Claire magazine, looking stunning.

Rossellini’s return was the peak of a wave of fabulous older celebrity spokesmodels, including 52-year-old Julia Roberts, who also has a contract at Lancôme. Canadian dietician-turned later-life model Maye Musk, 71, is a CoverGirl spokesperson. Jessica Lange, 70, has posed for Marc Jacobs Beauty, and Charlotte Rampling, 74, for Nars. Recently, celebrity makeup artist Charlotte Tilbury hired Dame Joan Collins, 86, to be the face of her Airbrush Flawless Foundation. (Side note: Collins’s documentation of her own fabulous life in Instagram is a unadulterated joy.) Going beyond casting, this spring, beauty giant L’Oréal Paris launched its Age Perfect makeup range, a full colour collection designed for and marketed to women over 50. Viola Davis, 54, is an ambassador for the line along with Helen Mirren, 74, and Jane Fonda, 82. And in a spectacular example of longevity, 61-year-old Andie MacDowell has been representing the brand for 34 years and counting.

The new appreciation of older role models extends beyond celeb spokesmodels to celebrating the accomplishments of a wide range of women over 50. This season of Project Runway featured its oldest-ever contestant, Nancy Volpe-Beringer, who is 64 and took up the calling of fashion design only a few years ago. She made it to the final four and emerged with 20,000 enthusiastic Instagram followers and a budding career.

For more examples of later-life success, reference the replies to a tweet that went viral in January. Television writer Melissa Hunter pleaded: “Instead of 30 Under 30 and NextGen lists, please profile middle-aged people who just got their big breaks. I want to read about a mother of 2 who published her first novel, a director who released their first studio feature at 47, THAT’S THE LIST WE WANT.” Hunter (@melissaFTW) was overwhelmed with replies about people who had written their first book later in life, acquired a PhD and volunteered at a wildlife sanctuary in Zimbabwe.

The momentum built: In late February, Forbes magazine, long known for lists of top achievers under 30, announced that this year it is seeking nominations for 50 over 50: women “who have achieved significant success later in life, often by overcoming formidable odds or barriers.” The recipients, to be announced in July, will cover all fields — C suite execs to STEM visionaries, cultural creators to policy-makers.

“What people over 50 bring to the table is a wealth of experience, and amazing EQ [emotional intelligence], which often younger people don’t have,” says Minquini. Her project, Mykigai, will be a forum for networking and connection for older people to expand their opportunities, and features experts sharing their professional experience — highly respected Canadian fashion stylist Susie Sheffman kicked things off, speaking on a panel at Mykigai’s launch event last fall.

Get some good advice in your inbox

Get expert advice on life and relationships with the Star’s weekly Advice email newsletter.

Oldish.ca is another new hub for this age group. The women’s beauty, fashion and health-focused site is run by veteran Toronto journalist Liza Herz. “I started Oldish out of frustration over the lack of content out there for women my age,” says Herz, who is 55. A sample quote: “Matte foundation is the ugly dad sneaker of makeup. It only looks good on young people.” Another of her tip- and perspective-filled stories is titled “I Sleep Under a Tablecloth: A Hot Flash True Story.” “The great thing about being 55 is I’m unembarrassable,” says Herz. “So I can happily share the fact that sleeping under a linen tablecloth is a way to minimize night sweats.”

This kind of relatable content is welcome because, of course, real life doesn’t have much to do with pop stars on stripper poles. “My friends and I were awed by J.Lo’s Super Bowl performance, but honestly, she’s not a role-model per se,” says Herz. “I mean — she danced in heels that my friends and I would be terrified to walk five steps in.”

In the quest for inclusion, it is often one step forward and two steps back. But right now, the voices of women over 50 are gaining traction. Don’t underestimate the power of representation in popular culture: If we finally get used to seeing images and stories of older women being capable, powerful, successful and beautiful just the way they are, we can truly enter a glorious new age.

How and Why Pantone Set 2021’s Fashion Trends

What Does Sex Appeal in Fashion Actually Mean in 2021?

Jennifer Lopez at 50: Her Major Milestones

The Perfect Shoes and Bags to Pair With Spring Looks