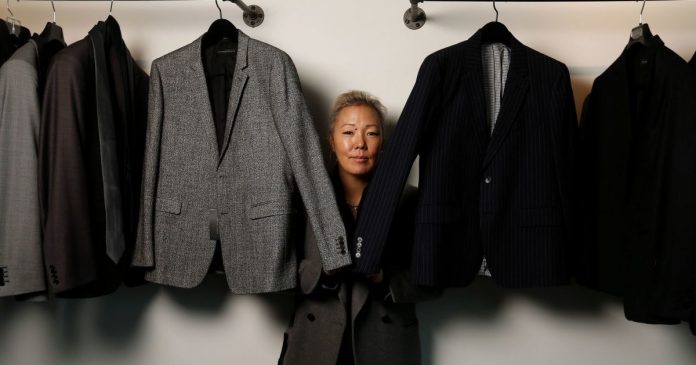 For Hollywood studios and their top-earning A-list talent, the growing list of COVID-19 canceled award shows, film festivals and press tours has made marketing movies and TV shows during a global pandemic more challenging. Over time, though, workarounds have emerged, including video-conferenced talk-show appearances and plans for this year’s Emmy Awards to take place virtually instead of in-person. But the celebrity stylists who earn livings dressing stars for such occasions don’t have such a workaround. No red carpet (or photo shoot or film festival) means no styling work.

We recently checked in with a handful of Hollywood’s go-to stylists — the kind of folks who dress stars like Rami Malek, Donald Glover, Jason Momoa, Keanu Reeves, Kristen Stewart and Allison Janney — to see what they’ve been doing to survive and thrive during the crisis. The big takeaway? With no return to the red carpet on the horizon, the key to survival has been turning side hustles into main hustles. Call it the “pandemic pivot.”

Best-known for styling Stewart, Julie Bowen and Janney, Tara Swennen has also earned a reputation as an outspoken friend of the animals. She was celebrated for her efforts at L.A.’s Vegan Fashion Week in October, and her household menagerie includes a pair of pot-bellied pigs, Sprinkles and Chocolate Chip, and a tortoise named Skittle.

Last gig: “I halted mid-music video with one of my clients, and we never got to shoot it,” Swennen said. “But the last major production I did was the movie poster for Kristen Stewart’s new movie, ‘Happiest Season,’ which is a Christmas movie.” That was in the first week of March. (The film is set for a Nov. 25 theatrical release.) “I joked with my agent that the ultimate irony is it will probably be the first thing that comes back to fully promote.”

Next gig: Swennen said she’s had three styling jobs since then — two over Zoom, one in person — and all in the second half of July. “Lana Condor is the new face of Neutrogena so I sort of Zoom-styled her for her coming out as a brand ambassador,” Swennen said. “And I did the same thing for a photo shoot for Julie Bowen. I made outfits for her, dropped off the clothes and just let her go.” The in-person gig, for which she styled Janney for a national magazine cover shoot (she can’t disclose which one), involved staggered arrivals, multiple rooms to avoid crowding and a point person responsible for keeping things wiped down and sanitized.

Financial impact: “Up until two weeks ago, I was at 100% down, and now I’m at maybe [95% down] as far as the styling,” Swennen said. “Everything that I’ve managed to create has been a sort of byproduct of my brand and my career’s work but not actually styling per se.”

In between: A few months ago, Swennen joined forces with Stephanie Sprangers, founder of digital styling app Glamhive, to organize a series of digital style summits (the first took place in May, the second in early July) that brought together top talent from the worlds of style, beauty and design to participate in virtual panels, presentations and roundtable discussions on topics ranging from size-inclusiveness to how to pivot your business in a time of change.

The latter topic is something that’s been very much on her mind. “The whole thing right now is about living and learning,” she said. “It’s about figuring out where you can pivot a bit, where you can put your assets and what you can do right now without using too much capital, because nobody has any right now.”

For Swennen, that means dipping her toes into the digital influencer space. “I’ve come to Instagram a bit and sort of used my brand to get a couple things out there,” she said. “I just did [a style-out of essential summer pieces] for Fila. And I’ve got something lined up, but it won’t come out until September, so I can’t talk about it.” She’s also leveraging her reputation as a vocal vegan to move beyond fashion beauty, noting that she just did her first deal with a food brand.

Speaking of which, Swennen recently added another snout to feed. “My daughter is an only child, and we needed something to focus on because she couldn’t see all her friends,” she said. “So we thought the best thing to do was rescue a pig.” With the new addition, Peanut, to the mix, the stylist now has three little pigs living under her roof. “That’s right,” Swennen said with a chuckle. “I’m living in a fairy tale.”

Outlook: In advance of the first Glamhive summit, Swennen said she sent an email blast to 1,000 contacts. “[I sent them] to heads of departments and big people at different brands,” she said. “And 657 of them bounced back. That made me realize that virtually everyone I know has been furloughed. I was like, ‘OK, when this is over, I’m going to have to start from scratch.’”

In addition to dressing some of Hollywood’s most stylish menfolk during her career — Malek, Dwayne “The Rock” Johnson, Bradley Cooper, Chris Evans and Glover, among them — Urbinati has managed to forge an equally impressive list of brand partnerships. She’s collaborated on men’s suiting (with Strong Suit), created a limited-edition capsule collection with Eddie Bauer and popped up in a Walmart TV commercial — as herself — during the 2019 Academy Awards. (She was also on The Times’ 2019 list of power players shaping L.A.’s fashion future.)

Last gig: “The last big job I did right before [everything shut down] was prepping [for] the James Bond press tour because I dress Rami Malek,” Urbinati said. “Then that got delayed. It was supposed to be coming out in April.” (The Bond film, “No Time to Die,” is expected to hit theaters on Nov. 20). She added that she’d been prepping to dress Johnson for this summer’s “Jungle Cruise” press tour (originally slated for release in July, it’s since been bumped to summer 2021) and was “smack in the middle” of the press tour for “A Quiet Place Part II” (she styles the movie’s director and co-writer, John Krasinski). “And then I also did the cover of the Hollywood Reporter’s most powerful stylist issue. That literally came out two days before the lockdown.”

Next gig: Urbinati said the styling job spigot that had turned off so abruptly in mid-March started to open back up in late June. “I’ve been doing jobs, because my client Charlie Puth just launched his album, so I’ve been working with him on that.” (If you’ve seen Puth’s recent TV commercial for Subway, then you’ve seen Urbinati’s handiwork.) She’s also styled actor Brandon Flynn (“13 Reasons Why”) for a couple of recent photo shoots, including one for the website Who What Wear and one for the fashion industry trade paper Women’s Wear Daily.

Financial impact: Urbinati estimates that her styling income is down 98% as a result of scrapped press tours, canceled film festivals and the like. “I’ve lost hundreds of thousands of dollars that I normally would have made that I did not make at all,” she said. “I’ve done, maybe, four or five jobs, and I’d usually be doing 60 jobs a month.”

In between: “For the first three months or so, there was no styling — nothing — and I’d just had twins, so I was kind of just focusing on that,” Urbinati said. “Then it was time to work.”

Urbinati said she’s been hard at work on three major projects but can’t get into too much detail about any of them (because they have yet to be officially announced). “Let’s just say that basically I took a lot of these side hustles I was doing and made them my main hustles and took projects I’ve dreamt of doing for a long time but never got time to do and really focused all of my attention on those.”

The first is a pop-up drive-in movie theater she hopes to open in L.A. in August (“I got together with a couple of big brands — I’m not allowed to say which ones yet — and we’re going to be showing classic films”), the second is a writing project (“I’d been working on it for six months, and I finally got to finish it”) and she’ll describe the third only as “a kind of media company.” “It’s probably the biggest project I’ve worked on in my life,” she said.

Outlook: “I’ve completely pivoted, and [I’m] literally doing completely other things,” Urbinati said. “I’m kind of looking at it as ‘This will be my job now until, I don’t know, next year.’” She added that the pandemic-induced stop-down has also gotten her to think about the future of her profession. “I don’t know what’s going to happen with styling. Even if the lockdown ceased, I think it’s a tough time, because I don’t think people really care about celebrities right now — at least in that glamorous way. I don’t think anybody wants to see [people] fully decked out, fully made-up, suited or what [have you]. I don’t even know what the future of luxury looks like.”

Yang’s client roster includes Momoa, Robert Downey Jr., Kumail Nanjiani, Jamie Dornan and Reeves, and it’s almost impossible to toss a blazer button without hitting her handiwork from BMW commercials (Scott Eastwood) and the couch of “The Graham Norton Show” (Reeves and Dornan — at the same time) to the red carpet (she was the guiding hand behind Momoa’s standout pink Fendi tux at the 2019 Academy Awards as well as his Tom Ford and Valentino look at the 2020 Golden Globes).

Last gig: A promotional photo shoot for “World of Dance” with Jennifer Lopez, Ne-Yo and Derek Hough. “I work with Derek,” Yang said, “and that was the last actual physical [photo] shoot I was on. They were about to do a crowd shoot with something like 1,500 audience members, and I just remember thinking, ‘That’s crazy.’ That was right after the Oscars.”

Next gig: “I’ve had a couple of private clients that have needed stuff, but tomorrow is my first shoot — it’s a celebrity shoot with one person in a studio in downtown L.A. for a magazine,” she said in mid-July. “Then I have another one in two weeks and another one in three weeks. This is honestly the first time I’ve had emails about actual jobs in quite some time.”

Financial impact: “I’m off 100%,” Yang said about the March-to-July period compared to past years. “Last year was the best year I’ve ever had in my entire life. I went 72 days without a day off. It’s one thing to go from zero to 60 [mph], because things just kind of ramp up. But to go from 120 [mph] to zero was pretty crazy.”

In between: “This is the first time I’ve had free in, maybe, 25 years,” said Yang, whose twin daughters are headed off to college in fall. “I know it sounds terrible, but I feel like I’ve been given a gift to be able to spend time with my kids before they leave for college. I’m usually working my butt off, so I never have time to hang out.”

Outlook: Yang credits her attitude to growing up in a Zen Buddhist environment. “This may not seem like the right way that you need to go,” she said, “but this is what you need to go through to get to where you’re going.

“It’s all about learning how to turn lemons into lemonade. And this is about as lemon as it gets.”

Is this the most sustainable brand yet?

The One Show: Alex Jones wows in floral Oasis dress