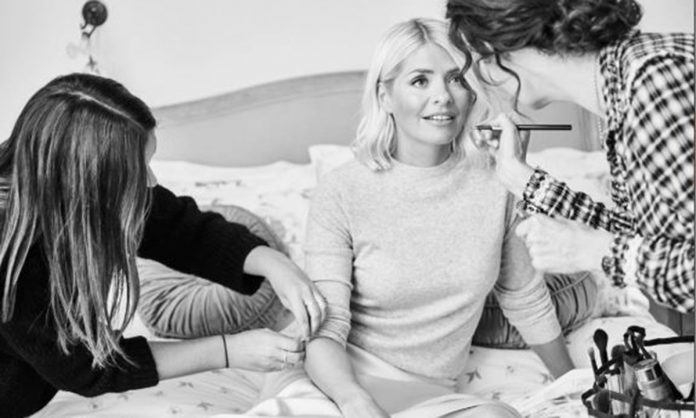 Holly Willoughby is one of the nation’s favourite style icons thanks to her chic tailoring and impeccable dress collection. But the This Morning star’s transformation hasn’t been all her own-doing, she’s had a huge helping hand from fashion stylist Angie Smith, one of the most influential celebrity stylists in the UK right now. While we know plenty about Angie’s work credentials and even what the inside of her home looks like, she tends to keep her face out of the spotlight – until now…

One glance at Angie’s gorgeous Instagram page reveals that she prefers to photograph her daily outfits from the neck down, but on Friday she gave her followers a rare treat by sharing a clip to her Instagram Stories which revealed what she actually looks like, sort of. In the clip, Angie is playing around with a filter that turns her face into a burger. However, in a split second before the change, you finally get a proper glimpse of the stylist – with a face mask on. While her flawless complexion may be covered by a white film, it’s clear to see that Angie is a beautiful lady. She was certainly in the giving mood too as on Saturday she shared another image, in which she reveals half of her face while posing with a cute dog. Angie’s infamous ‘faceless’ selfies have caused quite a stir, with her followers desperate to see what she looks like. Angie previously admitted that she takes headless selfies to see if her outfits look good. In an interview with The Times, she said: “Take a picture of yourself in an outfit, then chop your head off. Then you can look at the outfit more objectively.”

Angie Smith is famous for her ‘faceless’ selfies

Her logic certainly works for her as not only is she the mastermind behind Holly’s style evolution – think THAT sold-out rainbow dress – she is also responsible for the looks of some of the hottest celebrity style-favourites right now. From Rochelle Humes to Laura Whitmore and even the Spice Girls, she’s one busy lady. She also works with Angela Scanlon, Christine Lampard, Giovanna Fletcher, Emma Bunton, and Geri Halliwell.

Holly has credited Angie for totally transforming her look and explained to HELLO!: “I’ve learnt from her. I’ve learnt that with all of my clothes, I’m like a little sponge, it becomes more natural after you have been doing it for a long time,” she said.

How to Shop Outfits Inspired by Bridgerton, The Crown, The Queen’s Gambit, and Other Emmy Nominees

45 Celebrities Whose Style Has Completely Transformed Since the’90s

These are the queer icons shaping fashion