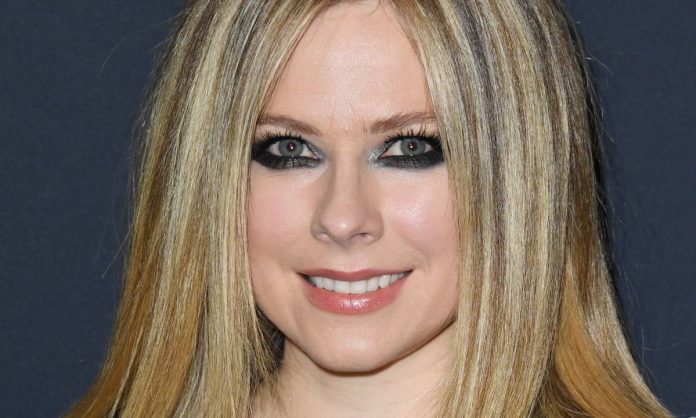 Avril Lavigne took to Instagram to share a rare photo with her boyfriend Mod Sun. The Canadian singer looked sensational in a cut-out crop top showcasing her toned physique

Avril Lavigne has been delighting fans with more and more photos of her and boyfriend Mod Sun, and her latest social media picture showcases her fabulous fashion sense too!

MORE: Avril Lavigne breaks out the swimsuit for a day out with Mod Sun

Over the weekend, the Canadian singer took to Instagram to share a loved-up picture of herself and her partner backstage ahead of his show.

In the picture, Avril looked stylish dressed in a neon orange crop top featuring cut-out details, which was teamed with a pair of camouflage trousers and a buckled belt, and black boots.

VIDEO: Avril Lavigne looks incredible during trip to the beach

The singer had her arm wrapped around her shirtless boyfriend ahead of his big night, who looked stylish in a pair of sunglasses and jeans.

MORE: Avril Lavigne shares the most adorable glimpse from inside her garden

The star later joined Mod Sun on stage, sharing photos of them singing together on her feed.

Just last month, Avril and Mod celebrated their anniversary with a romantic picnic. While the notoriously private couple didn’t reveal how long of a relationship their anniversary marked, rumours about the duo started to swirl around February of this year. The two first came together when they collaborated on the song Flames from his last album, which became one of his most successful singles and was Avril’s first release of the year.

MORE: Avril Lavigne’s new pictures spark major reaction and has all her fans saying one thing

Avril, 36, took an extended break from the spotlight before making an epic comeback in 2019, following her incredible success in the 2000s with hits including Sk8r Boi and Girlfriend.

While she is now back and planning to drop her next record, the reason behind her mysterious absence is heartbreaking.

The singer joined her boyfriend on stage

The punk legend was diagnosed with Lyme Disease in 2014, which left her with crippling complications for over two years.

READ: Avril Lavigne is radiant as she announces long-awated news

Taking to Billboard, the star revealed that when her health deteriorated, she was in bed for “two years” and was left feeling “trapped” in her own body. Avril’s heartbreaking confession explains the inspiration behind the title track on her last album Head Above Water.

“I’ve really had the time to be able to just be present, instead of being, like, a machine: studio, tour, studio, tour. This is the first break I’ve ever taken since I was 15,” she admitted.

Why more women are spending big on one-off clothes

#nomakeup, ‘glass skin,’ all coral and other beauty trends to try in 2019

The 2010s Were a Turning Point for Diversity in Fashion

Yellow, pink and blue heels take on the gram

Belfast Fashion Spy: ‘Kate Moss can look great in jeans and a top’